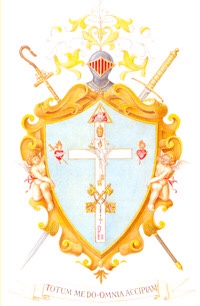 A CALL TO ACTION

William John Costellia: Born in Germany in 1950 May 16th – Feast of Jesus Christ’s Ascension Received a Mission from Jesus and Mary in 1966, on Easter Sunday. I was sixteen, turning seventeen only one month later.

I was told that I would live until Jesus Returned; that I would lead the people of the world and would receive many Messages to guide the world. As the years progressed I had a very interesting childhood, but at the age of fifteen, I was told by my father – whom my mother had separated from only a year before – that he was not my father. My Mother had me amongst the rubble of the war in Koln, when she was fifteen, from an Italian soldier – his name was John Costellia.

It was in 1980 that my Public Mission began when I received my first Message. Jesus had revealed that I would become the Last Pope – called Peter Abraham. It was in August 2002 that I was charged and in October 2005 I was sentenced to ten years imprisonment.

My Mission was to form a Religious Order: The Order of St. Charbel and join all Seers in unity.

In 2014 I was released from jail and forced to live in central Sydney until now, but my Mission had not changed, so now I am asking all Seers and Visionaries to unite and thrust the Evil One back to Hell. I ask all Seers to contact me so we can do that.

Wishing you well and God’s Blessing upon you.